Building his very own Stonehenge 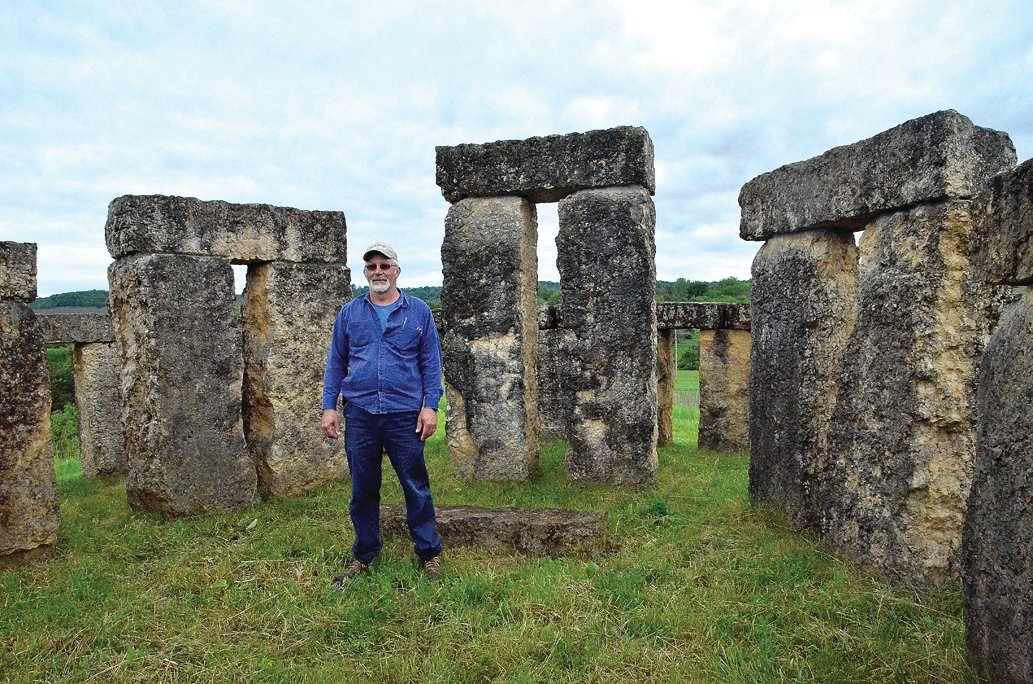 As a way to use large boulders that he excavated on a neighbor’s property, Ralph Radke started his Stonehenge project in 2003. It took him years, but the monument high atop a hill along Longhollow Road, is now finished.
Hillary Dickerson photos 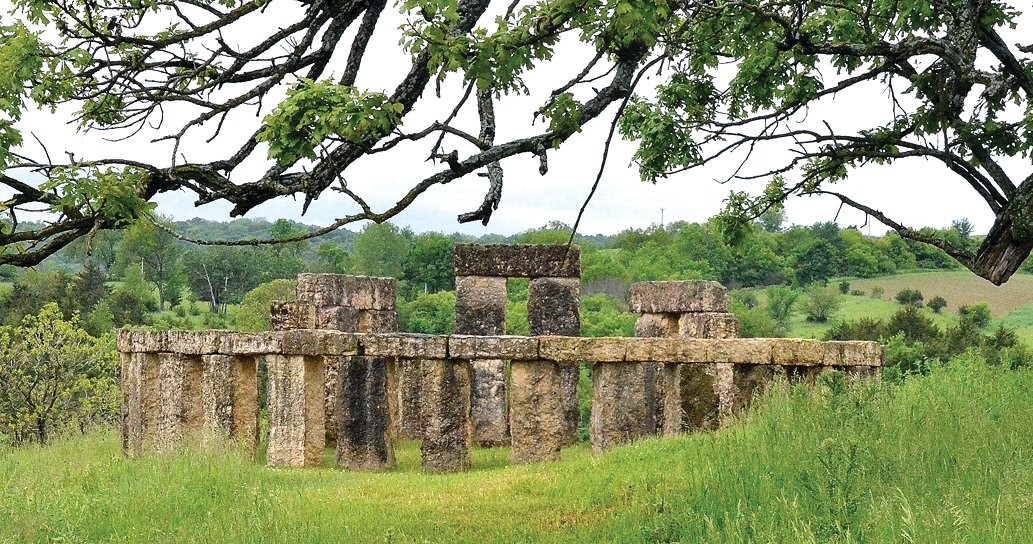 After 14 years of work, Ralph Radke completed his “CloneHenge” a couple years ago. It still grabs the attention of those traveling Longhollow Road or looking out over the county’s landscape from the scenic overlook near Elizabeth. 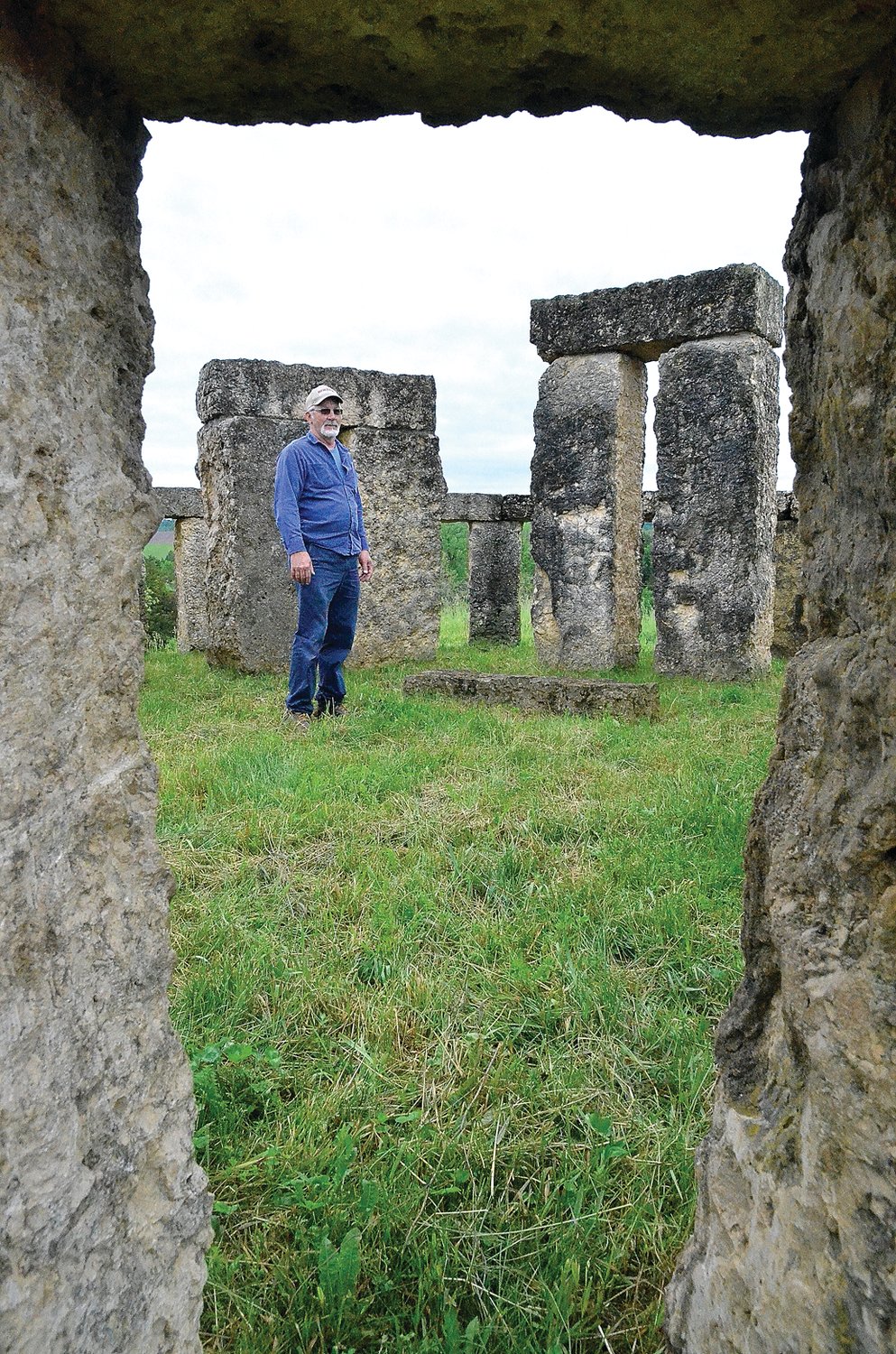 Ralph Radke stands near the center of the smaller scale Stonehenge he created over more than a decade on his property on Longhollow Road in rural Elizabeth.
Previous Next
Posted Monday, June 29, 2020 6:05 pm
by Hillary Dickerson

ELIZABETH–One evening in 2003, sitting around a backyard campfire, Ralph Radke and a friend were talking about the rock that was excavated for a new house on the next road over from Radke’s rural Elizabeth property. The rock was just laying along the driveway and Radke and his friend wanted to figure out something that could be done with it.

The two friends threw out all sorts of ideas before settling on a pretty unique project for the rural landscape of Jo Daviess County: Stonehenge. Radke, with some help here and there, would erect a small scale version of the prehistoric monument located in Wiltshire, England.

The Jo Daviess County Stonehenge–now known as CloneHenge on Google maps and a third scale of the real Stonehenge–was designed to catch the attention of people traveling to The Galena Territory, Radke said. He hoped that they’d wonder what the miniature version was all about, and that’s been the case. People stop from time to time to inquire about the history and meaning.

Radke has no trespassing signs posted, and the public is expected to view the monument from the road below. There are two steers in the pasture that keep the weeds down.

At one point, Radke said, one of steers got stuck in the inner circle of the monument and Radke had to move a stone to free the animal. Radke also tries to keep the grass mowed around CloneHenge to make it stand out a bit better.

All the pieces started falling into place as Radke pursued the project. When Radke asked about the large boulders, the neighbor offered them for the hauling. Transporting the stone was tough. Radke made a special trailer, taking special care to move the stone carefully to prevent any breaks.

It wasn’t quick or easy work, that’s for sure. Radke’s project took 14 years to complete. He estimates he logged between 1,700 and 2,000 hours from start to finish. He admits there were moments that he regretted his decision to start the project. He did research on Stonehenge as well.

Radke’s family was supportive of the project. His dad, who lives just over the hill, gave Radke tools he had from doing rock work around his house. To begin, Radke picked the spot on the hill, where he knew his work would be on display. He dug down to solid rock and leveled the area.

Originally the plan was to create the monument in the deteriorated state that Stonehenge is in today, but Radke changed his mind and created the original, which he discovered was more work. He started at the center and worked his way out. CloneHenge is perfectly centered with a metal stake at the middle, Radke said, and it is lined up with the summer solstice.

There might be a lot of large rock in the area, Radke said, but making the rock into the correct sizes is the challenge.

Because he’d built some retaining walls on his property, Radke, a pipefitter at Titan Tire, had been working some with limestone already. He used a generator, rotary hammer to drill holes to move the rock and a wedge and feather system to split the rocks into the right sizes. The more holes he drilled, Radke found, the straighter the splits.

And he drilled a lot–probably 2,000 holes in total. He wore out one hammer drill and multiple bits.

For the finishing work, Radke used a chisel bit in the rotary hammer.

The biggest boulder at the center, Radke said, is 8 feet tall and 5,200 pounds. The rocks sitting on top are about a ton each. The rocks that create the circle weigh less. To keep the rocks as level as possible, Radke poured cement pads for each.

Working on the project when he had time, it took Radke 14 years to complete. He said his work the first few years was much more steady. The stone from the neighbor’s didn’t go as far as he’d expected, so he had to search elsewhere.

“The majority of that stone came from within a mile of here,” said Radke, looking up at the finished project from his driveway and recalling all the hours he logged creating something truly unique.

Father-daughter bring dream to life: ‘It will be Hallmark’

fyi: Check out these holiday events

ROCKFORD–Sally Anne Sharelis, 81, passed away peacefully Thursday, Nov. 24, 2022, while celebrating her favorite holiday surrounded by her family. Visitation will be held …

SAVANNA–Edith “Eileen” Ailene McIntyre, 91, Savanna, passed away in her home with her husband by her side on Friday, Nov. 25, 2022. A funeral service will be held Tuesday, …

RAPID RIVER, Mich.–Craig James Olson, Rapid River, Mich., passed away Tuesday, Nov. 15, 2022, at the age of 65. Funeral services celebrating the life of Craig were held at the …