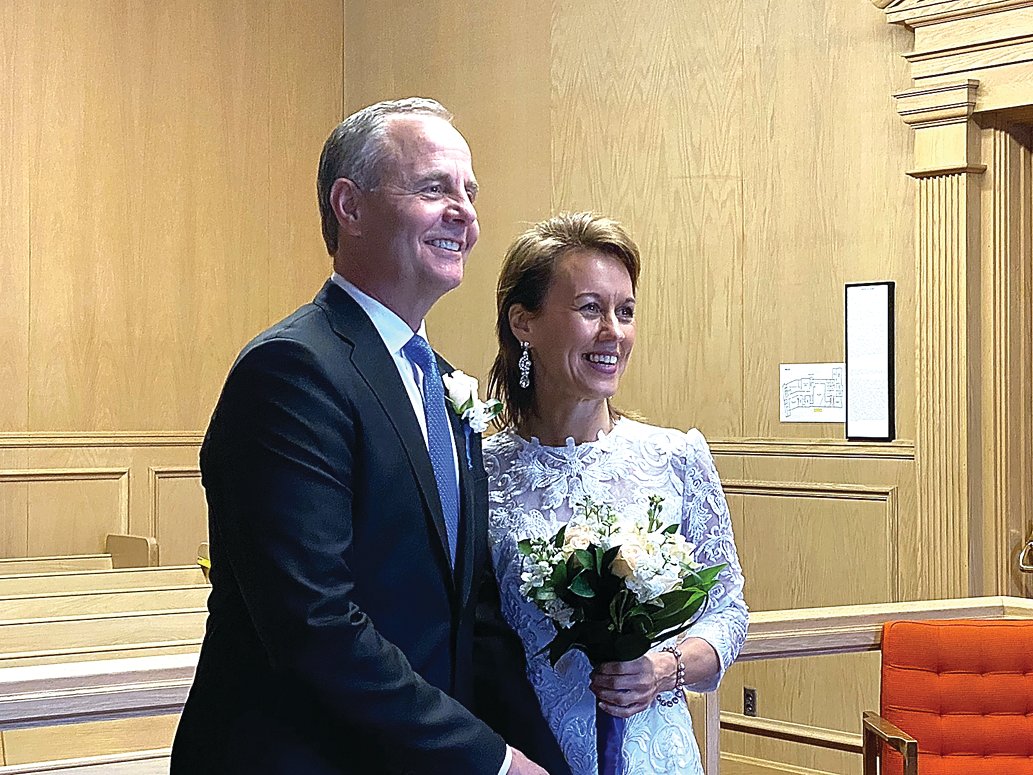 Gary and Julie Schreiber were married Nov. 20 by Judge Kevin Ward in the Zoom wedding conducted at the Jo Daviess County Courthouse. Since then, three more couples have tied the knot virtually.
Contributed photo 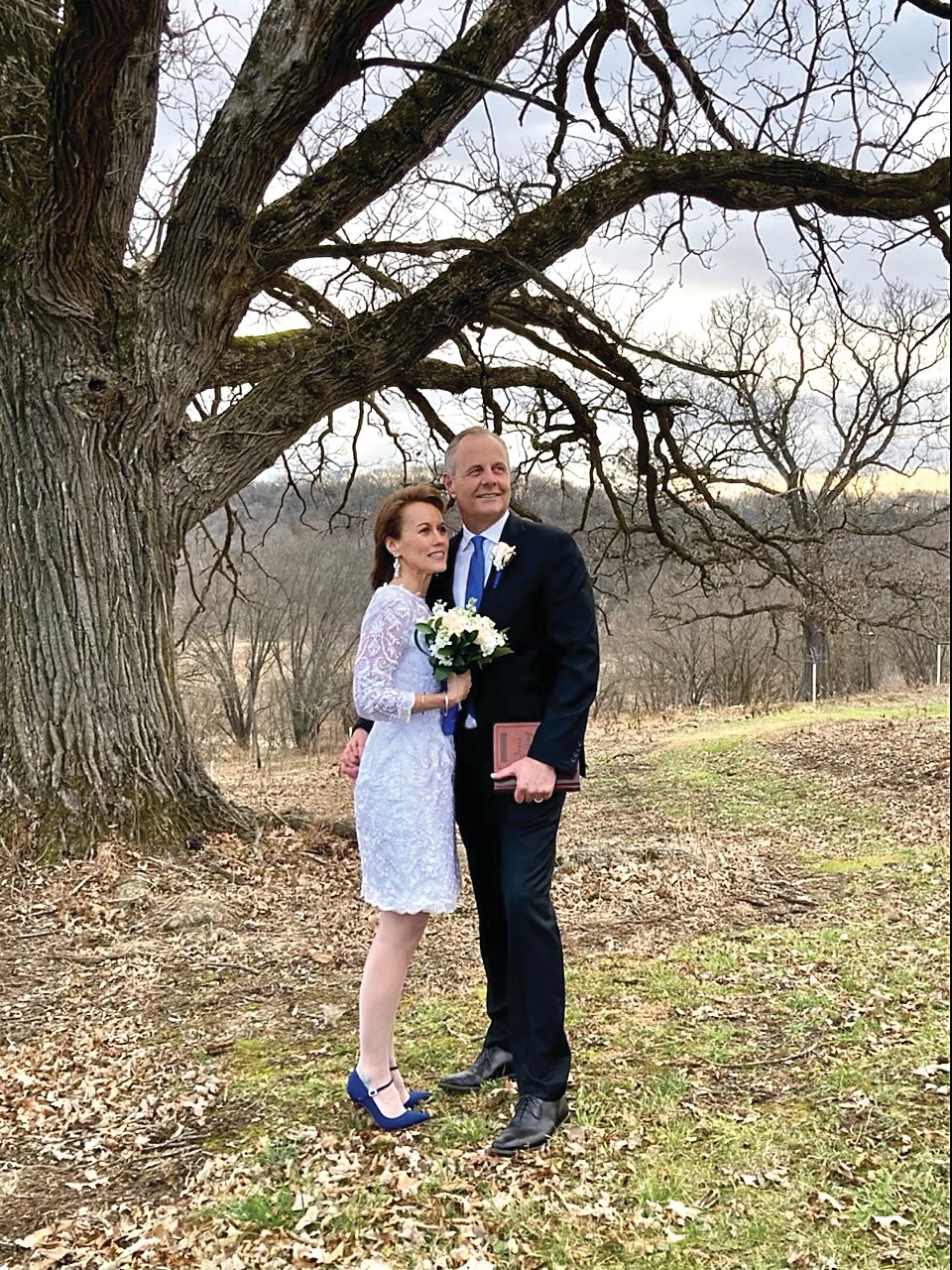 As they’d planned, the Hinsdale couple married Friday, Nov. 20 in a civil ceremony at the Jo Daviess County Courthouse. What wasn’t planned was that the judge, Kevin Ward, appeared over Zoom.

Their wedding was the first conducted over the virtual platform by Ward, but that didn’t take away from the special occasion.

“It fits 2020,” said Gary, noting that since the pandemic began in the spring, so much of day-to-day life has revolved around Zoom or other virtual platforms.

The couple originally intended to marry closer to home, in DuPage County, but changed their minds after a couple visits earlier this year to a stone cottage vacation rental in rural Galena owned by Mark and Trisha Wollam.

During their second visit in August, the Schreibers decided Galena was the better option. Ceremonies in DuPage County are backed up to February because of the ongoing pandemic.

The Schreibers called the Jo Daviess County Courthouse, got all the information and scheduled the wedding for Nov. 20. They wanted the 11-20-20 date. They decided they would follow the courthouse ceremony with a private ceremony at the Wollams, who had become fast friends.

As the day drew nearer, though, the situation in Illinois changed. Gov. J.B. Pritzker issued a Tier 3 mitigation executive order on Nov. 18. The Schreibers decided to head to Galena a couple days early, hoping their Friday wedding wouldn’t be cancelled.

Thursday morning, Nov. 19, they took a call from Kathy Phillips, Jo Daviess County circuit clerk, who explained that Ward would not be coming into the courthouse but would instead be using Zoom for marriages.

Gary admitted that if the news about a Zoom wedding had been presented in the spring, they might have declined, but the way the year has progressed, it seemed entirely fitting.

Gary made a last-minute call to Jean Carlson at Garden Party Florist. Carlson managed to pull together a bouquet and boutonniere.

“We didn’t know what to expect,” said Gary, recalling how that Friday morning they arrived at the courthouse, were shown into the courtroom and recited their vows in front of a television.

Ward, they agreed, was positive and engaging.

“We just had a beautiful touch,” said Gary, noting how meaningful the ceremony turned out to be.

“It fit what we wanted,” Julie added.

Phillips explained that when the Schreibers originally set their date, the plan was for an in-person ceremony, but like so many other things this year, the situation evolved. When she called that Thursday the options were either to Zoom, reschedule or go elsewhere.

The courthouse remains closed to the public except by appointment, and of course, couples are unable to bring family and friends along.

Phillips is glad the Schreibers were willing to roll with it and that they had such a positive experience. Phillips even acted as the photographer, documenting the ceremony for the Schreibers as best she could.

“They were our guinea pigs,” Phillips said.

Since the Schreibers’ wedding, three other couples have tied the knot over Zoom, Phillips reported.

Julie praised all the courthouse staff they worked with throughout the process, from the county clerk’s office to the circuit clerk and judge.

“Kudos to all those out there who make even outsiders feel comfortable and welcome,” she said.

I wouldn’t have a suggestion on what to do different,” said Gary.

Following their wedding ceremonies, at the courthouse and the Wollams, the Schreibers spent the day hiking and then checked into the Goldmoor for the weekend. They’re now settling into married life in a year unlike any other.

Bottle cap bench arrives for use at River Ridge

Celebrate Hispanic Heritage Month at Live on the plaza

INVERNESS–Sonia E. Smith, 73, Inverness and formerly of Galena, passed away. Funeral services will be held privately at a later date. For more information, please call …

EAST DUBUQUE–Velda Lorraine Temperley, 98, East Dubuque, passed away on Monday, Sept. 26, 2022, at Unity Point-Finley Hospital, Dubuque. Visitation will be from 4-7 p.m. on …