Making the best of it: This Thanksgiving was different and yet it was unique and quite satisfying 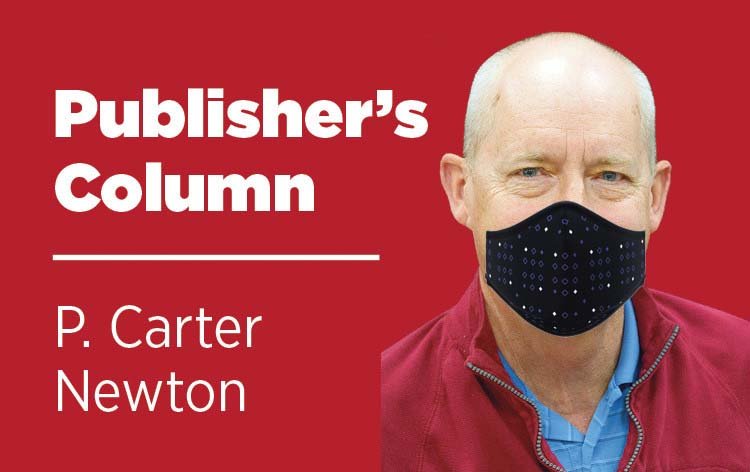 We made the best of it and you know what, we survived and I would say even thrived.

That was Thanksgiving this year sans family. Just Sarah and me, myself and I. And besides, there weren’t going to be that many family members around anyway.

This was the year our three children, their spouses or significant others, one mighty cute grandchild, my mom and our adopted family member, Henry, would be coming for Christmas.

But we had just come to the conclusion that with Sarah’s health situation and the surge of COVID-19 cases throughout the country that this wasn’t the year for a large family gathering. And, since we talk the talk regarding masks, social distancing and being careful here, we thought walking the walk would be a good thing to do, as well.

Any thought of our annual holiday party for friends, family and co-workers had come and gone a long time ago.

There was a certain comfort making that decision. We’ll just make the best of it for the Christmas holiday, just as we did for Thanksgiving.

But, with just the two of us at home for Thanksgiving for the first time ever, what could we do to make it special? We made it a special day.

We prepared the turkey–spatchcocked and cooked on the grill–as well as mashed potatoes and stuffing. Steve and Charissa supplied appetizers, a salad and an assortment of pies–mince meat, pecan and pumpkin–for dessert.

That’s just part of what made the day special.

It started with made-from-scratch blueberry buttermilk pancakes for breakfast. Sarah doesn’t much care for blueberries so she generously allowed me to hog them all. There was enough batter left over for a big blueberry pancake on Sunday morning.

Then, Sarah decided we didn’t have enough potatoes for that day’s mashed potatoes. We needed a full five-pound bag. She wanted plenty of leftovers.

That was my morning’s task. Get to Piggly Wiggly before its 1 p.m., closing time.

Somehow, I must have gotten lost (wink, wink). Ten miles later, I finally found the grocery store, purchased the potatoes and placed them in my knapsack. Perfect.

It was also fun watching football games, as well, and I can definitely say we had a better time than the Detroit Lions and Dallas Cowboys who suffered lopsided losses. The weekend didn’t get any better for the Lions’ general manager and coach. They were fired.

Our day’s success rested on a philosophy, a way of thinking: don’t worry about what you don’t have. Appreciate what you have and savor it.

Just as Sarah and I savored our shared dinner, we savored our breakfast. I savored a bicycle adventure as well as the process of grilling the turkey and helping Sarah with the mashed potatoes and stuffing.

I think that it’s this mindset of appreciating what you have along with a modicum of patience that will carry us all through this ordeal because this pandemic appears to be far from over.

There is some light on the horizon as vaccines appear to be available for the most vulnerable and front-line medical workers later this month. The thought of manufacturing enough vaccine to protect the population of the United States is daunting, let alone the entire world.

This pandemic is a world issue and the logistics are immense. Much will be learned in the process.

Much has been learned about this virus over the past nine months. The importance of mask wearing has been reinforced over and over. It’s the mask which contain droplets from your mouth, droplets that might contain the virus. Masks also protect you from the virus carried about in the air.

A recent New York Times article noted that for most people, you are most contagious with the virus two days before symptoms appear and five days after.

None of us, I believe, wants, with intention, to put others in harm’s way. So, when you are in public without a mask, you are doing just that. You could feel perfectly fine and yet be shedding the virus.

As COVID-19 swirls about the community we have the opportunity to make the best of the situation by helping keep each other safe.

‘Not Cheaper by the Dozen’

Conversation and tales with the Galena River