Waiting for the vaccine: Hartig ready to administer shots; just waiting for doses 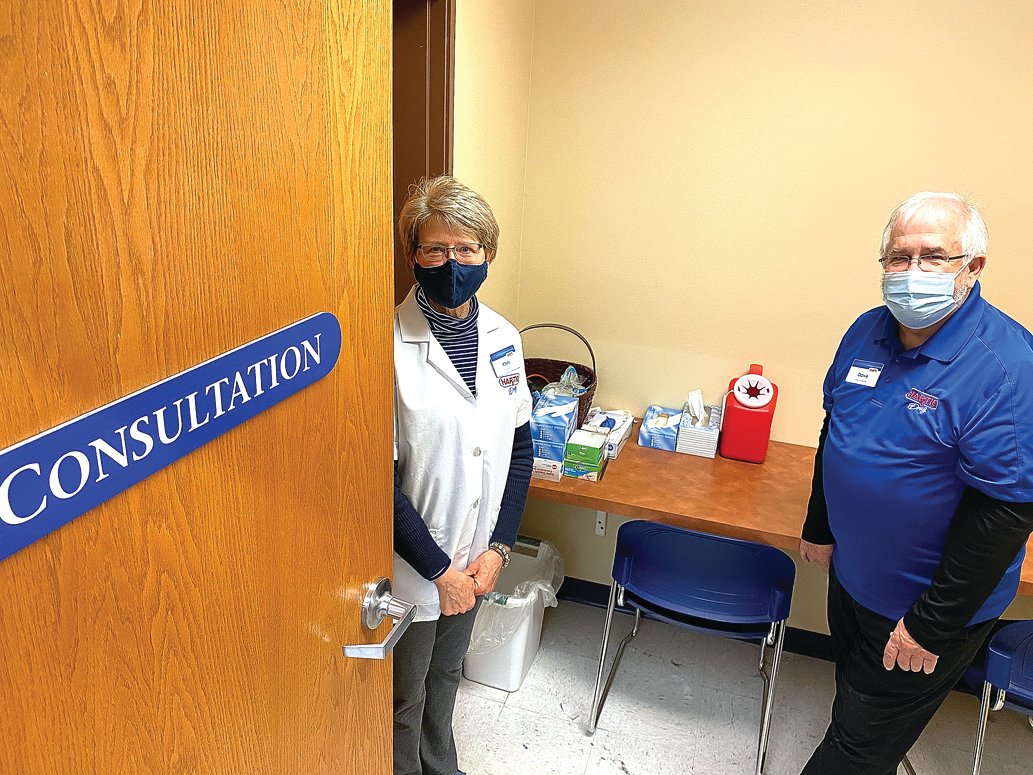 Pharmacist Khris Moser and store manager Dave McCabe at Galena’s Hartig Drug stand in the consultation room that will be used for COVID vaccinations. Hartig Drug is working with state and local agencies to try to receive vaccine doses that they can administer locally.
Jay Dickerson photo
Posted Tuesday, February 16, 2021 12:00 am
fyi

Visit hartigdrug.com/ to sign up for Hartig Drug’s waitlist.

GALENA–Charlie Hartig, CEO of Hartig Drug, said his company is ready to help vaccinate individuals in Jo Daviess County. They’re just waiting for doses.
“Unlike the public health departments that are getting vaccine directly from the government, we have a three-pronged approach to trying to get vaccine into Hartig Drug locations,” said Hartig.

Federal program
The first prong of that approach is through the federal government. Hartig Drug is included in the federal pharmacy partnership program, which includes some of the larger pharmacy chains such as Walgreen’s and CVS.
On Feb. 2, the White House activated about 10 percent of pharmacies in that group as a pilot. The pilot program for the vaccine started last week.
Hartig has been told by Centers for Disease Control (CDC) and federal government contacts that in two weeks the entire group will be activated to begin receiving vaccine from the federal government.
“That will allow us to submit orders and receive supply, probably by the last week of February,” said Hartig. “We are reliant on state actors, plus federal, to activate Hartig Drug.”
Hartig has made contact with Iowa and Wisconsin’s state public health departments and anticipates activation from them. He has yet to get through with Illinois Department of Public Health in Springfield.

Working with the states, county
The second approach to getting vaccines is to work directly with the states.
In Wisconsin, all of the vaccines at Hartig Drug locations have come from the state.
About two weeks ago, Hartig Drug gave 600 vaccines in their five locations in Wisconsin. The Grant County sites are currently out of vaccines.
The third approach is working with county health departments.
“We have reached out to every county health department that we have a location in,” said Hartig. “Many of them have asked for our help as vaccinators to provide shots. Half of our Iowa locations are giving vaccine and those are coming from the county.”
Hartig Drug Director of pharmacy has had several conversations with the Jo Daviess County Health Department.
“Unfortunately the amount of vaccine (Jo Daviess County) is getting now is not enough where they need additional assistance,” said Hartig. “They know that when they have more doses than they can work through, both our Galena and Stockton location would be more than willing to take on some doses.”
Hartig said the pharmacies are ready and willing to step up locally to serve the need of the public.
“We are standing ready at those locations in Jo Daviess. We are also exploring off site clinics when things open up to the next phase,” said Hartig.
Hartig said the company is working the three approaches as much as they can to get vaccine into all of their stores.

Waitlists
Hartig Drug is utilizing a waitlist for all of pharmacies to manage the volume of people requesting a vaccine dose.
“You can sign up for the waitlist and we will work right down the wait list,” said Hartig.
Hartig Drug is a first-come, first-serve list where people will enter information that screens for eligibility depending on the specific qualifications for the groups of each state that are eligible at that time.


Advertisement Advertisement
“Our pharmacists are looking at the first person on that list and if they are eligible and they are in the right geography, they will get a call and get scheduled for an appointment,” said Hartig. “They will then get an email confirming the appointment and a text message reminder two hours before the appointment.”

Changes locally
Hartig said there have been some changes at the stores to adapt to the coronavirus vaccine distribution.
The Galena location, for example, will be utilizing its consultation room for vaccination clinics.
Internally, Hartig Drug is also making changes.
“We have put some internal technology in place for the vaccine,” said Hartig. “The appointment scheduler is brand new to Hartig Drug and was a fairly large endeavor that we sped up very quickly. We are also working on an initiative to automate our reporting back to the states.”
According to Hartig, the pharmacy has five to six different entities to report to in order to confirm where the vaccine goes. They have to report to the state, CDC and an entity called VaccineFinder which puts out a list of everyone that has vaccine available and can be searched by the public. There are two other systems that are monitored by government entities. One of those is a system that reports wasted doses.
“I am happy to say that we have not had to log into that. We have not wasted one and my goal is to not waste one,” said Hartig.
There has been no additional training needed for pharmacists as they already provide the flu vaccine on an annual basis.
“The difference is just going to be the volume,” said Hartig. “At the height of the flu vaccine period, we are giving about 1,500 flu shots in a week and we anticipate that we will be giving more than that for COVID.”
Hartig said it’s important to balance the number of vaccines being provided while taking care of patients who need prescriptions.
“There are no pharmacy groups out there that have been able to hire a whole work force just to do vaccines,” said Hartig. “There just simply aren’t enough pharmacists or technicians to fill that need. We have authorized more hours and in some cases overtime in order to make sure we are getting enough shots out the door.”
Hartig put in place internal benchmarks for how many shots pharmacists can do and is working with each store to figure out the right balance.

‘We just want doses’
Hartig Drug is ready and willing to step up to help all of the communities that they serve.
“We just want doses,” said Hartig. “We want to help the community in any way that we can. We are also asking people to be patient in this endeavor.”
Hartig said he and the pharmacists have had to learn to practice patience over the last couple months with the vaccine rollout.
“It is frustrating for us too, when not being able to give out doses,” said Hartig. “Pharmacists provide about half of the country’s flu vaccines and give out a bunch of other shots and clinical services. It was frustrating to not be included right away.”
Hartig said he understood the practicality and how things were going.
“We are planning mass vaccination clinic days,” said Hartig.
Hartig recently had a vaccination clinic in southwest Wisconsin at the Platteville, Lancaster and Fennimore locations, which provided 400 shots in three and a half days. They also recently gave out 50 shots in a couple hours in Bellevue.
“We have a pool of pharmacists and technicians that are available for all three states as the need requires,” said Hartig. “If we get a larger amount of vaccine than we anticipate, we have the option to bump up the appointments and add more doses.”
Hartig said some of the names on the waitlist are being removed because people were able to receive the vaccine from other providers.
“We are ready to help,” said Hartig. “We are just waiting for doses. We very much want to be part of the solution and are ready to be part of the solution in Jo Daviess County. We are just being patient like everyone else and waiting for our turn to help the community.”